[A video of President Kennedy’s funeral appears later on this page.  The following excerpt is from the Arlington National Cemetery official website, linked below.]

The Eternal Flame over the grave of President John Fitzgerald Kennedy.

John F. Kennedy made his first formal visit to Arlington National Cemetery on Armistice Day, Nov. 11, 1961, to place a wreath at the Tomb of the Unknowns. At the conclusion of the ceremony President Kennedy spoke to more than 5,000 people gathered in the Memorial Amphitheater.

President Kennedy’s address began; “We meet in quiet commemoration of a historic day of peace. In an age that threatens the survival of freedom, we join together to honor those who made our freedom possible. … It is a tragic fact, that war still more destructive and still sanguinary followed [World War II]; that man’s capacity to devise new ways of killing his fellow men have far outstripped his capacity to live in peace with his fellow man.”

Eleven days prior to Kennedy’s assassination he returned to Arlington for the 1963 Armistice Day services. This time he did not address the crowd in the amphitheater.

On Nov. 22, 1963, while on a campaign trip to Dallas, President Kennedy was shot and killed.

There are only two U.S. presidents buried at Arlington National Cemetery. The other is William Howard Taft, who died in 1930.

Though Kennedy is buried at Arlington, at the time of his death, many believed that he would be buried in Brookline, Mass. Woodrow Wilson was the only other president besides Taft who had been buried outside of his native state and in the National Capital Region. President Wilson is buried at the National Cathedral in Washington, D.C. . . . .

I do remember where I was when I heard President Kennedy had been shot.  I was in my high school Earth Science class.  I also remember seeing through the classroom window, Eagle Scout, Winslow Golly, Jr., who upon hearing the news, immediately left his classroom and went to the flagpole to lower our American Flag to half-staff.

Today’s broadcast media fare is replete with the history surrounding President Kennedy’s tenure in office at the helm of the United States of America, a servant of We the People, as it should be on the 50th Anniversary of that Dark and Evil Day in Dallas. The assassination of John F. Kennedy, 35th president of our nation, moved me deeply.  It seemed surreal, like it couldn’t be true, but it was. . . .  My political alignment was meaningless in the reality that the president of my nation under God, had been brutally slain!  I mourned with my classmates, family, and friends, and with my fellow-Americans.

Our Girl Scout Troop, led by my mother, Sylvia Courtney, had plans for a weekend trip to Camp Maripai Girl Scout Camp; we were to leave our schools early ahead of the Friday traffic.  My mother wondered if she should cancel the trip because of the earth-shattering news, conflicting details of which were reported on radio and TV.  Consulting with parents, they all concluded that President Kennedy would not have wanted schoolgirls to cancel their trip.

We went, and we were completely cut-off from the rest of the world and the news until Sunday evening.  It was strange knowing what had happened, how important it was, and be miles from home and communications without knowing what was happening as our nation mourned with us.  We held a solemn service for the president with the first raising of the flag, and remembered him at each raising and retiring of it during our stay.

Our private news blackout was not mirrored in the rest of the country:

On November 22, 1963, at 12:40 p.m. CST — just 10 minutes after President Kennedy was shot — CBS broadcast the first nationwide TV news bulletin on the shooting. After that, all three television networks — CBS, NBC, and ABC — interrupted their regular programming to cover the assassination for four straight days. The JFK assassination was the longest uninterrupted news event on television until the coverage of the September 11 attacks in 2001.

During the trip back home, we heard of Jack Ruby’s murder of Lee Harvey Oswald, the accused assassin of the president, who was actually being held only for the murder of 39-year-old Officer J. D. Tippit; committed after Kennedy’s assassination, allegedly by Oswald as he left the Schoolbook Depository.  There were so many details being reported, it was hard to catch-up, and then to keep-up, with the news.  It still didn’t seem quite real.

I remember the funeral.  As I watched the following video today, the emotions rose once again.  I still will never forget tiny John-John’s Farewell Salute offered on his third birthday, as his father’s body was carried away before him and his sister, 6-year-old Caroline.

For this video and others offered at the end: https://www.youtube.com/watch?v=AiqrUMvxbbs

[For a shorter, much-clearer video that I could not embed here, covering Jackie Kennedy, Caroline, John-John, and additional aspects of the funeral, go to:
http://www.history.com/topics/caroline-kennedy/videos#world-mourns-john-f-kennedy ] 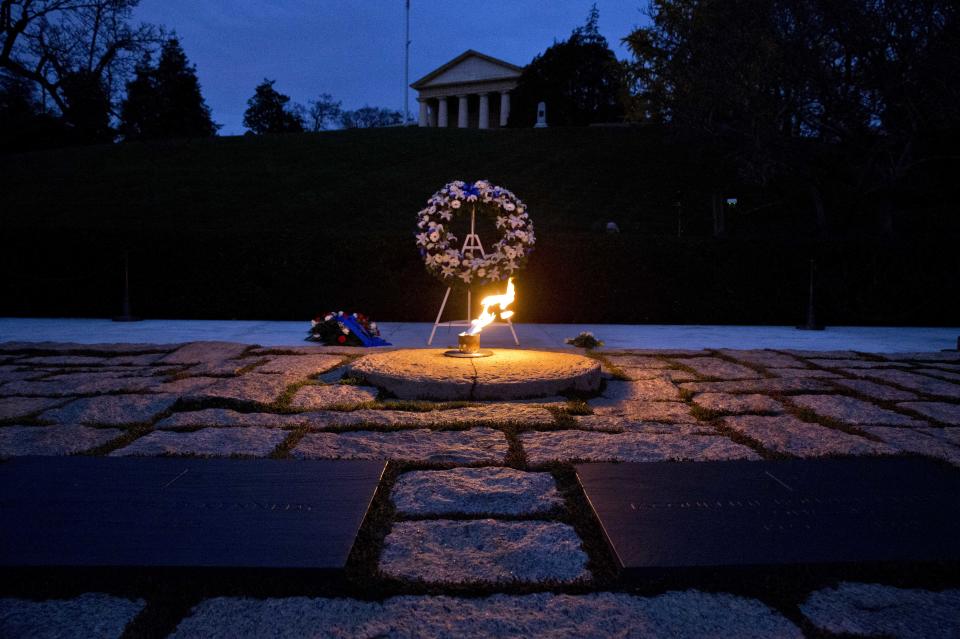 I found the Eternal Flame established at his gravesite, a fitting and thoughtful memorial to the president slain in my young lifetime.

The Flame reminds me that the American Spirit of Liberty has never been, nor will it ever be, quenched by mere earthly actions of Man!

Liberty’s Flame;
once-kindled,
it is
Eternal.

It burns in the
heart of
EVERY
American.

And,
it burns in the
heart of
EVERYONE
on Earth
who yearns to be
Free,
as only God can free him,

and,
as only LIMITED government,
in a
Free Nation under God,
can guarantee him,
on Earth.

[For an article and video on John Connally, Jr.’s experience on the day his father and JFK were shot: http://abclocal.go.com/ktrk/story?section=news/state&id=9335166 ]

I remember the mood of the entire nation during the week following this terrible crime against not only President John F. Kennedy and Governor John Connally and their families, but also against We the People of the United States of America. A darkness slammed down upon our nation when those shots were fired – no matter who pulled the trigger, or triggers.  Our daily lives were suddenly linked across the country with every other American,

as we mourned the violent murder of
John Fitzgerald Kennedy –
the
Death of OUR President: The somber mood was universal; it hung in the air like thick fog.  Risen from the shared grief, anger, and bewilderment of the American People, it gave our universe a feeling of being outside the normal perception of living Life.  Like a phase shift had displaced the whole, known world and set it out-of-sync. I know there have been other events in my lifetime that have heightened our unity as Americans regardless of politics, theology, and philosophy.  But, I’m only going to remind us of one other today: September 11, 2001, and, from my parents’, grandparents’, aunts and uncles’ lifetime, December 7, 1941.  The somber unity in the darkness of those days and their aftermath, also truly brought US together live through the horror,

AS
One Nation under God.

The JFK assassination was the longest uninterrupted news event on television until the coverage of the September 11 attacks in 2001.

On each Infamous Day, America was invaded by that

With 50 years now between that Black Friday in Dallas, and the Post-Constitutional America in which we now live, we can see with the clearness of hindsight, that, as were December 7, 1941, and September 11, 2001;

The Collectivist/Progressives pressed their agenda “forward” immediately, by the new president, Lyndon B. Johnson and his ilk in the United States Congress.  It gained a seminal boost from communist/marxists Saul Alinsky, and Richard Cloward and Frances Fox Piven, who gave their fellow-radicals diabolical and effective instructions on how to “fundamentally transform America,” and,

DESTROY
OUR
Republic
and,
OUR
Liberty under GOD!

A transformation their ideological progeny – culminating with Barack Hussein Obama and his fellow-travellers – have implemented ever since.  As they relentlessly pursue their tyrannical, collectivist utopia.

Mr. Obama, indeed, openly promised to fundamentally transform America, in 2008, and is feverishly working to reach the Finish Line, as he and his fellow-Collectivists transform America into their vision of Collectivist Tyranny.  [See “WHO IS Obama” Parts 1, 2, 3, and 4.  And, “Left Center Right.”]

The ensuing 50 years have brought us to a time of great peril to our UNIQUE and Great REPUBLIC, and the American Liberty our Founding Fathers established her to protect, with the Blessings and Providence of Almighty God.

May we see the 50th Anniversary of that terrible day in Dallas, 1963, as a DIRE WARNING; and awaken to revive our Liberty and restore our Constitution, as the Gift of God to a Free and God-fearing People.

“…if my people who are called by my name humble themselves, and pray  and seek my face and turn from their wicked ways, then I will hear from heaven and will forgive their sin and heal their land.”
2 Chronicles 7:14 Before he enter on the Execution of his Office, he shall take the following Oath or Affirmation:–

May we soon be Blessed by Almighty God to see and hear righteous Americans once again take this oath or affirmation, in the true and best interest of this,

Greatest Nation
upon the
Face of God’s Created Earth.

May we be used in God’s Plan and help to spread the word of how, with His Blessings and Providence,

SAVE AMERICA
and
OUR LIBERTY UNDER GOD
!!!